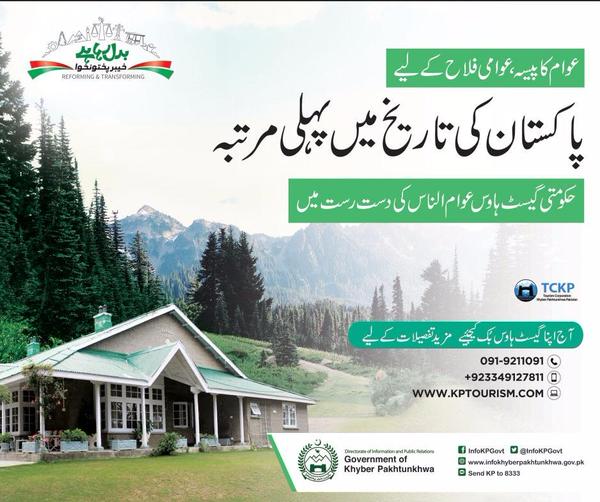 KPK Guest houses Open for public Now. Pakistan tour and travel has learnt that KPK government has made a remarkable step in improving tourism opportunity in KPK Province. The Newly elected government by spearhead Imran khan as chairman of Pakistan Threek Insaf,  had already promised before forming government that Governor houses, rest houses shall be made public and open for general users. He has lived upto his promise. The KPK Government has been spending millions on renovating these guest houses over the year. They have been very luxurious and treat for elite class as well as government officials. Now anyone can book a room there in very economical prices.

Pakistan tours shall be matured easily now. As Pakistan has started to get various tourist form different countries as Pakistan has become peaceful after hard efforts of civilians as well as Pak Army sacrifices. Pakistan tour and travel firmly belives that pakistan has great potential and move like as opening guest houses for public is a positive step in right direction. It shall surly fetch tourists in Nathiagali, swat, kalam, behrain, chitral as well as the most popular tourist destination Naran and Kaghan.