International Mountain Day is celebrated every year to raise the awareness of mountains communities around the world. In December 2002, UN General Assembly Resolution 57/245 officially declared December 11th as International Mountains Day. Three of the UN’s 17 Sustainable Development Goals are dedicated to promoting the sustainable development of mountains communities.

The United Nations Association celebrates International Mountains Day on December 11th each year. This day is dedicated to emphasizing the importance of the sustainable development of mountains and mountainss communities.

This day was established in 2003 and has a history of 15 years. To celebrate today, here are some of the Pakistani mountains that you should take a look at. 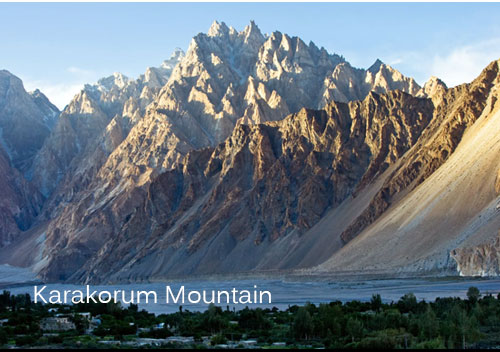 Nanga Parbat is located in the northern part of Pakistan and is the western fortress of the Himalayas. It is the ninth highest mountain in the world and the second-highest mountain in Pakistan after K2. Few people in Asia can match its history, and it staged some of the greatest Himalayas ever. From Hermann Pohl’s first solo climb to the north in 1953 to Gunther and Reinhold Messner’s first ascent of Raubal Vess in 1970 to the Southeast Spurs, Messner’s solo climb of Diamer Face in 1978, and, more recently, Vince Anderson and Steve’s alpine-style climbing. The house comes from the central pillar of the rural face. This epic climb continues to inspire climbers to try every year that is considered the second most difficult mountain after K2. 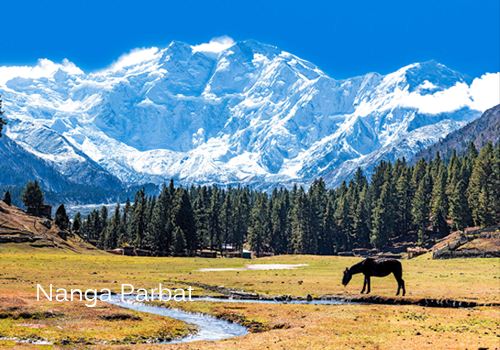 Nanga Parbat is a very cool sight. The south façade is the largest in the world, extending over four kilometers above the base camp. So far, there have been only five hikes from the south. Nanga Parbat means “naked mountain” in Hindi/Urdu, and it refers to the exposed rock support on the south wall. The North Face is equally scary. In stark contrast to the steep rocks and ice on the south side, the snow-capped north side is surrounded by a wide round platform spanning the width of the mountains range.

When we talk about the Gilgit-Baltistan region of Pakistan, Passu is a very important place. Gilgit-Baltistan has many places to roam, but because it is located along the Karakoram Highway (KKH), a small area of ​​Upper Hunza Passu has a huge advantage and is popular with tourists from all over the world.

The White Glacier is located in the Hunza Valley south of the village of Paso. Passu Peak is located on the back of the glacier. This glacier connects the Batur Glacier with other glaciers in the area and is a major tourist attraction. 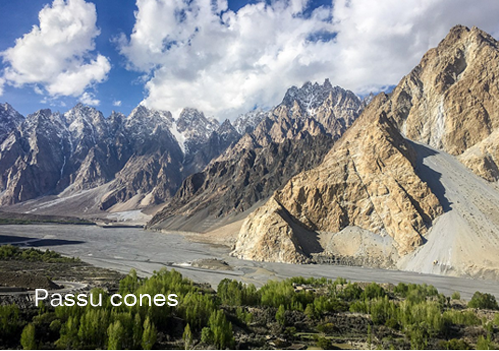 Passu Peak is called Passu Cones or Passu Cathedral and is 6,106 meters (20,033 feet) in height. When we talk about the Gilgit-Baltistan region of Pakistan, the Passo Cone is a very central location.

Spartanik Peak, also known as the Golden Peak, is a challenging climbing expedition that can reach the summit of 7,027 meters above sea level, with panoramic views of the surrounding mountains of the Karakoram Mountains. Depending on the weather window, the expedition lasts 15-35 days and is called a non-technical peak, although it is not just a trekking peak. Long roads, thick snow, and bad weather make this a challenging adventure and a good introduction to mountaineering.

Spartanik or Golden Peak is a peak in the Santik-Susbon sub-range of Karakoram. There is an unusually difficult climbing route to the northwest, called the “Golden Pillar”. It is located east of Diran and northeast of Malubiting. 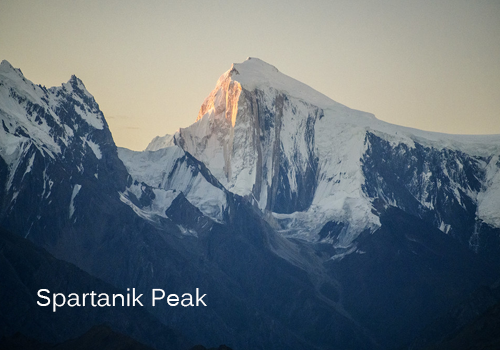 Furthermore, Spartanik was first ascended by Karl Kramer’s German expedition in 1955. The most frequently climbed route is along the southeast ridge, which was tried by the Bullock Workers’ Party in 1096. The ridge rises by 2700 meters over a lateral distance of 7.6 kilometers, and the angle is mostly less than 30 degrees, with several parts rising up to 40 degrees. It contains all kinds of terrain, from rocky outcrops to snow, ice, and gravel.

Since climbing is relatively easy and there is no objective danger, this peak is very popular with organized commercial expeditions. A short 3-day trek through simple terrain also provides convenient access and a gradual adaptation to the environment.

Rakaposhi Peak rises above Hunza and Nagar, at an elevation of 7,778 meters/25,518 feet, and is the 27th highest mountain in the world. Its base camp allows you to not only enjoy the magnificent view of the giant itself, but also the exceptionally beautiful Diran and Minapin glaciers.

Rakaposhi is the most famous peak in the Hunza Valley. Huge plots dominate the skyline of the Karakoram Highway, first seen in the north of Alibaba, but still visible in the south of Gilgit. This mountain is located in the Lakaposh-Haramosh Mountains that form the southwest corner of the Karakoram and is part of the Little Karakoram. The mountains are very wide, about 20 kilometers long from east to west. 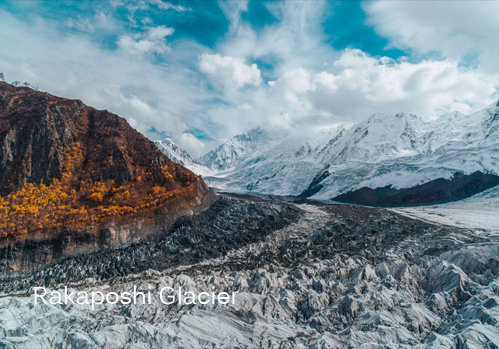 It is the only mountain on the earth that has a direct and uninterrupted descent of nearly 6000 meters from the top to the foot of the mountain. Except for the highest peak of the Rakaposhi, the block is Rakaposhi East (7010m). This peak is also of great value to geologists because it is the front end of Eurasia, and Nanga Parbat represents the front end of the Indian continent.

K2 is the second-highest peak in the world after Mount Everest; it is 8,611 meters above sea level, about 250 meters from the famous peak of Mount Everest. 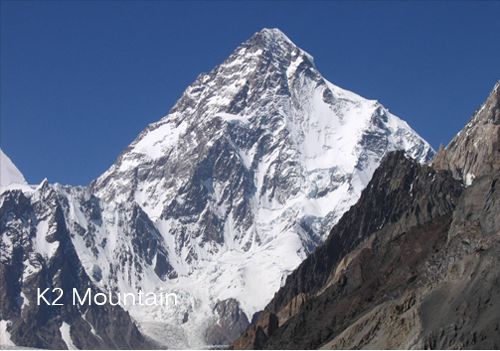 In December, dozens of climbers gathered at K2 to compete for one of the world’s last major climbing challenges. The peak itself is located on the China/Pakistan border between the Gilgit-Baltistan region of northern Pakistan and Xinjiang, China, and is the highest point of the two regions. In 1954, Italian climbers Achille Compagnoni and Lino Lacedelli reached the summit of Mount Everest for the first time. A year later, Sir Edmund Hillary successfully climbed Mount Everest for the first time.

Mitre Peak is a majestic mountain, but it pales in comparison to its neighbors in terms of altitude. 6,010 meters is not far in the area, there are more than 60 peaks nearby, among which the higher peaks. Some of the more famous ones are K2 (8611m), Gasherbrum I (8068m), Broad Peak (8047m), Gasherbrum II (8035m), and the slightly lower and very impressive Gasherbrum IV (7925m).

Mitre is named in the book “The World’s Greatest Mountain” by R. Messner (Sigloch edition, 1989). He wrote there:

This is only known for its shape-from two angles, it really resembles the bishop’s headdress-because it is surrounded by higher peaks, it does not look high, and it cannot be seen from a distance. Look. The Concordia Glacier gives the impression of being inaccessible. Its fragile rocks and snow ditch look unattractive. But it is still very beautiful. Who brought the problem of the first climb It is controversial, because unauthorized attempts to reach the summit have been repeated, so the record is unreliable.” 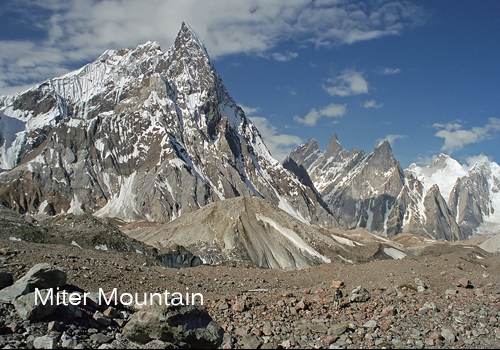 Mitre is far from any point of arrival in Pakistan. Sooner or later you have to pass through Islamabad because this is the town where you get the permit. This peak is famous for its shape-from two angles it really resembles a bishop’s hat-because it is surrounded by higher peaks, it does not seem too high to be seen. From a distance. From the Concordia Glacier, it is impressive and inaccessible. The crumbling rocks and snow-capped canyons look unattractive. But it is beautiful. The question of who will climb to the top is controversial. Because someone climbed to the top without permission, the record is unreliable.

Mitre is far away from any access point in Pakistan. Sooner or later you have to pass through Islamabad, which is the city where you get permission to climb to the top. If the organizer has arranged it for you, you can relax and follow the tour guide all over the country. If you want to organize everything yourself, the following may help.

Link Sar is part of the Masherbrum range of the Karakoram Mountains. It is a beautiful peak of 7,041 meters (or 23,100 feet) above sea level. It is located near K7 (6934 m), K6 (7282 m), Charakusa Glacier, and Capri Glacier. As we all know, these mountains in Pakistan’s Gilgit-Baltistan province are among the highest and most amazing places in the world. It can be said with certainty that they are the dream of climbers; a paradise for climbers and nature lovers. The mountains have not been affected by human existence, all their glory has been preserved. 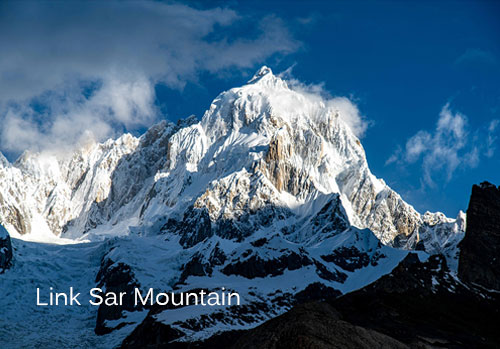 Since 1969, climbers have tried to reach the summit many times, but due to its location and structure, the trek is much more difficult. The last time John Griffith and Andy Hausman tried to reach the summit was in 2015. After their second attempt in two years, they reached the Link Saar West at 6,938 meters above sea level. The health complications that Griffith suffered during the ascent prevented them from reaching the main peak and they had to descend.

Do you have anything to add? Share in the comments below.