Multan (the city of Saints)

Situated in the south of Punjab, Multan has much of religious significance around Pakistan and throughout the world. Multan is commonly known as the city of saints due to a large number of shrines and Sufi saints from the city. It is one of the ancient city of subcontinent and 5th largest city of Pakistan having 3.8 million of population. Along with the religious and historical accounts of the ancient city, Multan also shares part in-country revenue as well.

Multan, also known as the “City of Saints“, is a city in Punjab (Punjab) near the Chenab River. It is an important economic and cultural centre in southern Punjab Province and one of the top ten cities in Pakistan. As one of the oldest cities in the Asian subcontinent, with a long history, there are many things to do and many places to visit in Multan. We will cover the city from a tourist’s perspective, making it easy for you to reach the city and do the best things in Multan. Let’s start with our travel guide in Multan and briefly introduce this mysterious ancient city.

The ancient city of Multan used to be the site of the historic Multan Sun Temple because it was besieged by Alexander the Great in early 300 BC. The eleventh and twelfth centuries witnessed many mystics and saints coming to this city because it was a commercial centre and a melting pot of various religions. After the conquest of Muhammad bin Qasim in 712 AD, Multan today became an important settlement.

This is why so many historical sites and religious sites have been discovered in Multan that tourists from all over the country pay tribute to these Sufis. The old walled city was a fortress built by the river, but the fortress of Multan was taken away by the British in the 19th century. However, the architecture of Multani has a unique style that distinguishes it from other landmarks in Pakistan. As the city’s climate ranges from summer to very hot in summer, travellers are advised to visit Multan between October and March, unless they clearly plan to endure the city’s hot weather in the remaining months.

How to Reach Multan?

Visit Multan between October and March for the best weather. You can reach Multan by plane, road and rail. You can travel to Multan by plane, train, bus or car, depending on your itinerary and speed of arrival in the city. A fast 1.5-hour flight can take you from Karachi or Islamabad to Multan International Airport, and you can also take a train from any major city in the country to Multan Cantt Railway Station. You can also use the Daewoo bus service that operates nationwide or use the N-5 national road that connects Multan with other cities in Pakistan to reach Multan.

Distance from Other Cities to Multan

From Multan Airport To Hotel

If you live in a hotel in a major city, it will take about 20 minutes to the airport. There are taxis and private vans at the airport. In Case you are staying in the Holiday Inn, it will only take 10-15 minutes by car.

The calculated flying distance from Islamabad to Multan is 260 miles or 419 kilometres.  If you want to travel by car, the driving distance between Islamabad and Multan is 556.89 kilometres. If you drive at an average speed of 112 km/h (70 mph), the driving time will be 04 hours and 58 minutes. Please check the average. Speed cruising schedule on the right with various options. The distance between flying and driving is 138 km.

The 95 kilometres of roads are very beautiful and there are not many stops nearby, so you can enjoy the beautiful countryside, and if you want, you can stop at schools or towns along the way.

The best way is to take a train from Multan to Sukkar. Regular trains depart at 07:45, 09:45, 11:20, and 13:05. Taking the train can be a great experience because you will see very interesting train stations and many people coming and going. You will also get a broader view.

The highway is 454 kilometres. The road is paved, but due to the journey of more than 9 hours, there is usually a large number of trucks passing.

It is usually recommended to race 7-8 horses for 348 kilometers in the Harappa Road Tour, which requires a 10-hour drive. The roads are very good, and there are many large and small towns along the way. One should set off early in the morning and stop at tea stalls and different cities. It takes about 3 hours and 30 minutes to reach Harappa, visits the attraction and museum later, and then continue to have lunch at a local restaurant in Lahore (usually Called Truck Restaurant) and arrive in Lahore in the evening.

This is the best time to visit Multan, as the city has recently undergone extensive repair and expansion work on all major arteries. You can drive or buy a ticket and board the Multan Metro Bus, a rapid transit system that connects all major areas of the city by shuttle buses. There are also a large number of rickshaws and traditional taxis. If all other methods fail and you need a fast way to travel, you can also rely on app-based ride-sharing services to get a comfortable ride experience.

What to buy when visit Multan?

Hussain Agahi Bazaar is an all-in-one bazaar, a paradise for craft lovers. You can enjoy everything from local electronics and textiles to carpets, spices and ceramics. You can also taste local dishes here. The bazaar is divided into several levels, and bargaining is essential to obtain a large number of transactions.

Multan is famous for its handicrafts. Recycle some blue tiles as travel souvenirs. Multan is a cultural centre with several handicrafts originating from Multan. These include the blue tiles that decorate many of the city’s shrines. Local craftsmen use the same blue tiles to make pottery, and you can retrieve unique vases or bowls to remind you of your trip. Another popular souvenir from Multan is Multani Mitte, a locally quarried clay known for its anti-acne properties. Multani Sohan Halwa is another speciality of the region, which should be brought to family and friends.

It has a big commercial area, Industries include fertilizer, cosmetics, glass manufacturing, cotton production and processing, large textile units, flour mills, sugar and oil mills and large-scale power generation projects and much more. It is famous for its handicrafts (carpets & ceramics) and cottage industries. Furthermore in the development of Multan takes the city on the next level. Comfortable travelling with planned infrastructure, lots of hotels, tombs, restaurant, parks, shrines, and hospitality make the city more interesting and colourful for the tourist.

Things to do in Multan

In addition to enjoying the beautiful scenery, Multan has many other things to do. Some of the best activities to make the most of town time include: cricket, which is the most favourite sports in Pakistan.

Top Places to Visit in Multan

Multan is truly a unique blend of history, culture, and inevitable industrialism, a city like no other. Culture is so rich, Multan is known for its traditional Khussas, white blue ceramics, handicrafts and medicated Multan sand along with the Sohan Halwa the world-famous sweet from Multan. There are numerous places to visit while exploring the city of saints. Some of the top 5 places with details are listed below: 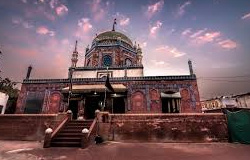 One of the most popular Sufi personality that lived, served and also buried in Multan is Shah Shams Tabriz, a great preacher and follower of Mulana RUMI. The tomb was built by his grandson in 1330 AD. Many devotee visit the shrine to embrace the blessing. The tomb of Shams-i Tabrīzī was recently nominated to be a UNESCO World Heritage Site. It is well preserved through the joint efforts of a devotee and the government. 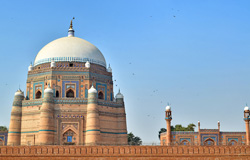 The tomb is located on the south-West side of the Multan Fort, Saint Sheikh Rukn-ud-Din Abul Fateh formally known as Shah Rukh e Alam is one of the popular Sufi saints. The tomb was built in 1320 to 1324 CE on the pre-Mughal architectural design. The mausoleum is built entirely of red brick, bounded with beams of shisham wood, which have turned black over the centuries. The tomb of Rukn-e-Alam is the glory of Multan. When the city is approached from any side the most prominent thing which can be seen from miles all around is a huge dome. 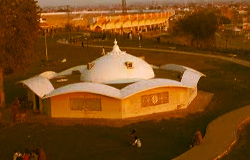 Nigar khana popularly known as the famous art gallery in Multan. Located Qila Kohna Qasim Bagh road a magnificent landmark and point of interest for the tourist exploring the city of saints. The lofty building with waving architectural design made it more beautiful. The art gallery mainly focuses on the rich culture of Multan that is the handicraft. People from a different sect of life visit the gallery and can purchase the pieces of their own choice and can give an applaud to the talent of Pakistan. 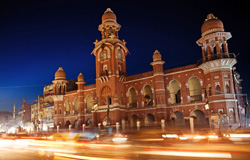 Well, known landmark of Multan was built in 1884AD during British rule. The large building has iconic significance for the city. The great architecture made it more historical, the building also contains a hall that was used for meeting in the previous era. Many renovations made to the building and now the building is serving as a museum, Multan Museum. 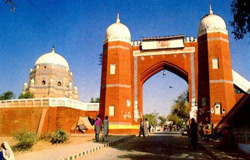 Multan Fort built in between 800 to 1000 BC, was a military installation and a piece of the architect. Multan Fort came into being but it was there and it was admired and desired by kings and emperors throughout centuries. When intact, its circumference was 6,600 ft. having 46 bastions, including two towers at each of the four gates i.e., Delhi Gate, Khizri Gate, Sikhi Gate and Rehri Gate. The fort was ravaged by the British to avenge the murder of one Mr Agnew in 1848. From the top of the fort, panoramic views of Multan city can be seen.

The list does not end here there is many mausoleums, shrines, monuments, old gates, colonial buildings, historical forts, museums, mosques, temples, church, sports ground, parks and much more that became the attraction for the tourists and make the Multan 5th largest city of Pakistan. Explore the Famous place of Multan city by yourself and witness the history itself.