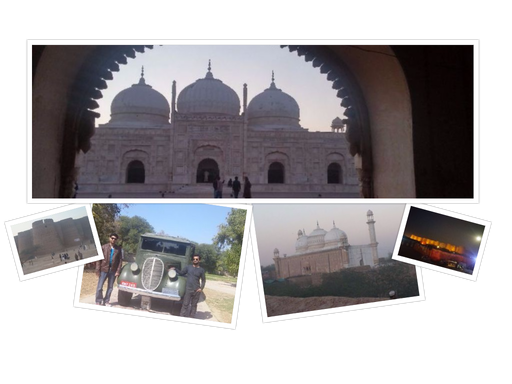 We also participated in a Cholistan Jeep Rally and started our quest to see Multan, Bahawalpur, and Fort Dirawar this time. Our Journestartedts from Rawalpindi at 3 pm when we took a sharp turn towards GT Road for sake of reaching the Motorway which turns out to pain taking experience as 15 minutes proposed journey took near one hour to reach Islamabad Motorway. However, after reaching Islamabad Motorway rest of the journey was smooth as we stayed for a few minutes at Berra interchange after 2 hours of Journey.  We were three initially, me ( Ejaz Husain), my younger brothers Waseeq, and Gulfam who were driving as well on the whole tour. Our first milestone was to reach Faisalabad where Mr. Iqbal Anchan was waiting for us to join us. We have been swift on Motorway but while reaching Faisalabad City, traffic was very slow so we were also slow. Picked Iqbal at 07.30 pm. Furthermore, we went to a nearby restaurant which was jam-packed as it happened to be the first day of PSL ( Pakistan Super League ), the inaugural ceremony was being aired and a large part of the Restaurant was occupied with mixed emotions but the taste of Biryani was amazingly nice.

Multan was our next destination. Multan City is a city of saints but it was 4 hours journey if we were on the correct road we lost our way despite using Google map but luckily remained on route to reaching Multan by 1.30 am.  This leg of the journey was more tiring as the road structure is not good due to the unavailability of a Motorway from Gojra to Multan. However, the road is very good from Multan City to Bahawalpur. Interestingly, we were able to reach our destination by 3 am. Our friend, Mr. Ahsan Raza Shah more famous as Shah JI was continuously in touch on the telephone and called nearly 300 times so that we could reach the City safely. Most Noteworthy, when we met him, dinner was ready which was taken near breakfast time. Furthermore, it was a lavish Dinner with a few nicely cooked items. After having dinner we reached our Hotel well sit-in the heart of Bahawalpur City, comfortable room awaited us and we slept right away.

First of all, we visited the Library of Bahawalpur, we saw some amazing handicrafts, historical scripts, and the famous Rolls Rice which was used by Quaid E Azam during his reign as Governor General of Pakistan. Ancients Coins were used during the reigns of Mughals and a few other famous emperors. Furthermore, various war items are part of the capacious library which was earlier a palace as well. Moreover, the road structure is very good in City and it does not look like an ancient city anymore as a modern Structure everywhere with state of the Art airports which is gifts from Arab Rulers who come frequently to the area for hunting various birds. Most Noteworthy, we visited Lal Sohanra Park where a large quantity of Blackbucks is being nurtured in open. We then went towards the Cholistan. We reached CHolistan in 2 hours from Bahawalpur. The road was not suitable for Toyota GLI Car but we reached it after some struggle.

We reached Fort near 5.30 pm so the light was fading and the area was buzzing with tourists who were coming from all Corners. Jeep Race had already commenced the day before we reached the area. We saw Fort in diminishing lights but it was nice to see it even in fading lights. We viewed various camping sights near the fort. The whole area was buzzing with a festive look. We were not able to go inside the fort due to its alarmingly bad condition due to no rehabilitation efforts by anyone. Fort is on verge of collapse hence visitors are allowed to enter the fort. Ancient Shahi Mosque is a present nearby fort. This Mosque is amazing as it was built by Nawabs of Bahawalpur and it is still living its glory days. We saw many people offering prayers. Cholistan desert goes towards Rahim Yar Khan and rally had a distance of near 450-kilometer with 3 nights to stay in open forest. TDCP tried good efforts to promote tourism in this southern Punjab but the facilities were a bit odd. Sanitation was virtually not there nor toilets were built despite the huge amount of expected visitors which was bad. Moreover, arrangements were not up to mark. Food stalls were present but they were providing sub-standard food.

Last day, we spent most of our time in Multan where we visited the famous shrines of Hazarat Bahauddin Zikriya ( RA),  Hazrat Shah Rukene Alam, and Hazarat Shah Shams Tabriz. All Shrines are heavily visited. These all Shrines are nearby each other and can be reached within a few minutes. After Visiting Multan we headed towards Rawalpindi Islamabad and reached Home 8 hours from Multan.