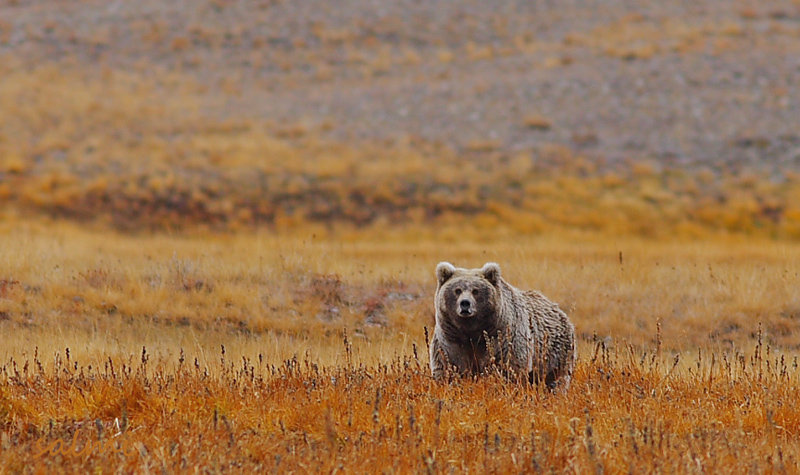 Deosai National Park-The roof of the world is the sublime beauty of Pakistan. It is nearly 40 miles drive from the City of Skardu. Deosai is situated at 4000 meters elevation. It is often quoted as “The Roof of the World”. It is the second-highest plateau in the world after Tibet.

Deosai is a famous tourist destination. Many tourists including locals and foreigners love the serenity of the place. It is gathered in small glacial mountains with crystal clear waters springing out of them. Deosai is renowned for its Himalayan Brown Bear.

According to the Himalayan Wildlife Foundation research during 1993 only 19 Himalayan Brown were alive and their population is continuously diminishing. Deosai is home to various rare species such as Markhor, Brown Bear, Marco Polo sheep, Deers, and original Eagles. Apart from its beautiful exotic locations, it contains riches of various rare species of natural Herbs only contained in Deosai due to its climate.

For the survival of Himalayan Brown Bears, Deosai National Park was established in 1993 that took various steps for the stability of Wildlife. The efforts by the Pakistan government and WWF (World Wildlife Foundation) paid off and soon after the decade of establishing the park there was a visible increase in the Himalayan Brown Bears. In 1993, there were only 19 brown bears and after a decade it increases to 40.

As it is a fact that the reproduction of Brown bears is quite slow as compared to other species. Additionally, the female bears are unable to produce cubs unless they are 8 eight years old and after that, it produces a single cub. The cub sticks to his mother for almost 5 years, while it is with her she will never make it again. So the slow and steady process of reproduction of Brown Bears needs very attention and somehow various initiatives taken by the authorities became productive.

Furthermore, in Deosai Plains and National Park, you will witness some of the rare species Himalayan ibex, red fox, and golden marmot locally called phia, grey wolf, the Ladakh Uriel, the snow leopard. Moreover, over 124 resident and immigrating birds like the golden eagle, lammergeyer, griffon vulture, lager falcon, peregrine falcon, Kestrel, Sparrowhawk, and snowcock are also the inhabitants of Deosai.

As the population of humans is ever-growing in the World this remote place has got its adverse effect. Earlier in the years, only a few nomads not more than one dozen used to visit Deosai plains but now their numbers have really increased. Nomads are coming with a large number of cattle and sheep for the search of Food. This surge in human traffic has really increased troubles for nature as well as animals who inhabit there.

The scarcity of food is alarming and due to food shortage, many animals are having a tough time even they are dying in such conditions. Local authorities are paying no attention and hence increased the danger for wildlife.

The vast plains of Deosai are a miracle on earth, where you can find only the ear-shattering beauty of the Creator. Pakistan Tour and Travel have learned that the Himalayan Wildlife Foundation is trying to lay down a new plan for the preservation of wildlife and prevention hunting in the Deosai plains as well.